Each and every four years when the entire world is gazed to the World Cup, one question keeps coming in the mind of Indian soccer fans: When and how will India become the part of this prestigious global event? While efforts have been put in the past to do so, India never came very close to the participation. The closest was in the year 1950 when they were invited but failed to get a passage to the host Brazil. 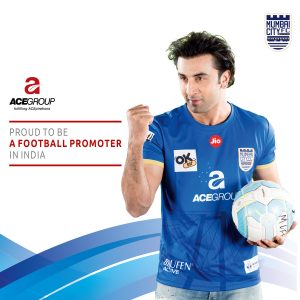 Ace Group has always been a proud promoter of football in India. The group is enhancing the lifestyle not just in the realty sector, but by contributing to other sectors such as sports, precisely football. Understanding the challenges that football promotion faces in the cricket frenzy country like India, Ace group decided to contribute for the betterment of this game. Instantly the start of ISL (Indian Super League) presented the perfect opportunity and a relationship between Ace Group and the ISL team Mumbai City FC took place in form of the sponsorship.

Ranbir Kapoor who is currently enjoying the success of his much-awaited Sanjay Dutt Biopic Sanju, is the owner of the Mumbai City FC and is glad to have Ace Group as the sponsors of his football team. Ajay Choudhary, CMD, Ace Group says “our partnership with Mumbai City FC is very endearing and we are extremely happy to be associated with Ranbir and his franchise. We believe in the team, in their brand of football and commitment towards the promotion of this wonderful game.

Ace Group believes that some of the key ingredients for the success of football in India are already present such as economic growth of country and now a professional football league with decent income for players and new centres. All of this has contributed to India’s rise in the FIFA rankings recently. However, to reach the next level, the passion for football, which exists despite cricket’s wider presence, must grow and evolve quickly.

For the bright start, the kids who are eagerly following the World Cup on their TV sets need to leave the comfort and couch and their sodas and popcorns and start kicking the ball in the field. There is no substitute to the timely catching a talent and nurturing it into a future star.