Starting this week Tuesday, passengers from Noida, and many parts of Delhi will be able to avoid the long waiting traffic snarls and will utilize the Janakpuri West-Botanical Garden corridor on the Delhi Metro’s Magenta Line. 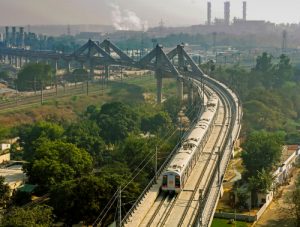 This specially comes as a blessing for the commuters travelling from Noida to Gurgaon and vice – versa. This line will also go to the Terminal-1 of the Delhi Airport from Noida making it much easier. Commuters will also be able to cover the distance between Noida and Gurugram at a much quicker pace than the present, which at present takes one hour and thirty minutes. The distance now is said to be covered in mere 50 minutes of time.

Many experts say it comes as especially good news for people who are willing to stay in Noida and are working in Gurgaon as comparatively Noida is offering residential housing at a lesser price. People specially looking to buy in any upcoming projects in Noida expressway or in any luxurious project in Noida expressway can now think less and should go ahead with their house buying plans as for them to travel to Gurugram is easier than ever before.

Mr. Hardeep Singh Puri – union minister for housing and urban affairs and chief minister of Delhi Mr. Arvind Kejriwal congratulated all individuals involved in this DMRC project and said that completion of this project will help reducing traffic jams as well as bringing down pollution levels.